Our Impermanent Permanence: Riding the Waves 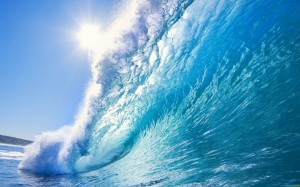 We want to believe that everything lasts. We last. Our loved ones last. That what we feel today is forever.

But it’s more like water. Waves upon waves of change and uncertainty shifting around us causing us to lose our footing – to go under and drink the salty brine and come up gasping for air – unsure of who we are. Where we are. Or if we’re alone.

We instinctively search for a horizon. A landing place. Safety. Anywhere. Until we find something solid to gaze upon and we feel secure again. Certain nothing will change.

But we’re still standing in the ocean…

The next wave is always bigger and knocks us over because we had our back to it.

We learn. We open our arms wide and embrace the waves. Laugh as they lift us higher in the air to reveal the greater view – the bigger picture. Hungrily we drink in that vast landscape noting the lighthouse we never saw before, the gull resting calmly on nothing halfway out to nowhere, and the long glistening white fish jumping high above the wave teasing us with its mystery.

We marvel at beauty. Knowing that something creates this – if not the gull itself. If not the water itself. A divine poet arranges the details. But who and how? We write books about this unknowingness, create careers analyzing it, build damns and concrete roads and bridges and still the water swirls around us mysteriously because we are amidst the living sea.

We are the living sea. That sea is in us; it courses through our veins; beats in our hearts. Just when we think we’ve discovered everything, that no one has ever known as much…

A wave rolls towards us from nowhere and we are teetering terrified above everything in the rush of changing water. We surrender once again to the power of the grand poet – as we’re pushed back to the ground by the force of the wave – our limbs dancing madly out of control, our heads brushing painfully against the sand, twisting and turning with abandon – until the wave releases us again. We struggle to our feet gasping – taking in raw sobbing breaths. Calling out to our friends whom we may have lost in the crushing waves.

Someday we do arrive on the beach through no efforts of our own. Then we realize we had choices in how we rode those waves. There are others who floated above them and some who fought and loss and drowned beneath them, and many who struggled endlessly when they only needed to surrender to the ride, rest their heads upon the salty brine – not trying to stand where it was impossible to stand.

And we see that we exhausted ourselves when we fought it, and that it would have been wiser to relax, surrender, laugh and even reach towards someone else who was going under.

We see then that all bodies make it to shore one day or another – one way or another. And that all that ever mattered was how we rode the lovely waves. And if we brought someone along with us to the vast white shore.